Our ongoing sound piece BREATHING WATER, which received project development support from @malmökulturstöd, focus on that 2 out of 3 breaths = oxygen coming from plants in the Oceans, and that our lungs are composed by 83 % of water, and that we breathe out 0,5 -1 liter of water a day.  Since January 2021 we have been working with field recordings above and under the surface in the waters of The Sound (Öresund), Malmö, Sweden, and improvisational composition in the Yellow Studio, Malmö.

With Breathing Water our aim was to continue our work with our first sound piece Water Dialogues and create a playful sound piece that spoke directly to the senses of being water and becoming with water. "Becoming involves a metaphysics that is grounded in connection, challenging delusions of separation. Donna Haraway tells us that “If we appreciate the foolishness of human exceptionalism then we know that becoming is always becoming with, in a contact zone where the outcome, where who is in the world, is at stake.”

But also Astrida Neimanis, (Hydrofeminism 2013) has been a reference.; We're all at Sea on youtube

In the artistic process, unexpected things happened due to our awareness of the increasing threat against our Oceans, and we needed to ask and explore the question CAN THE OCEAN DIE?
– And during our recordings underwater we experienced for us an unknown state of sense, since the sound underwater travels fast, 1500 m/s in saltwater, 4 times faster than in air. - When we listened to the sound that flowed through our ears but also directly through our bodies that consists of so much water, the line between the sea, our bodies, and the sounds became blurry and a kind of confusion and disorientation appeared. – And it also became obvious that The Sound is full of sound pollution. – We became shocked over how intense and how strong the sounds from especially the ships sounded.

We needed to process this and found out that there is 1 investigation made in 2014 that draws the conclusion that Porpoises, Seals, and Cods become stressed by the Ship traffic sounds in the Baltic Sea. (It is common known facts today that especially Mammal’s navigation and communication is affected by sonar, and bomb blasting of course).

Our field recording; 1 ship comes loaded 1 of 40 000 yearly in The Sound (underwater pollution) that is published in this piece, is a field recording made summer 2021, it is a plain recording, that is mastered without any effects, it is recorded with Aquarian H2a, Sound device premix 6.

We will keep on processing and are thinking about making/composing a sound piece with underwater sound pollution for dance.

But we are also working with something different; we have collected iPhone/smartphone recordings with people living in Malmö saying 2 sentences on languages that are spoken in Malmö, there are 160-180 languages in Malmö. So we will come back, we are not yet done with this piece!

The next step is to work with the piece making it possible for installation in a room or outdoor, and also try different versions that can work for us to perform and play together with the piece. Our goal is also to develop a version that can be installed in a sound shower outside, especially one part of the piece is on our minds for that. And if it is possible we would love to be able to install it and program it with algorithms!

Here is a playlist on Spotify with the 9 existing pieces of Breathing Water.

BREATHING WATER springs from, and is connected with the intuitive art project I STILL LIVE IN WATER, initially starting with a collaboration in the exhibition Amniotic Fluid/I Still Live in Water, 2018, at Tomelilla Art Hall that wanted to have a sound piece for their audio logs, making the exhibition available for blind and visually impaired. The result became the sound piece WATER DIALOGUES by Felicia Konrad, David Carlsson, Mats Persson, and Tina Quartey. Water Dialogues was also exhibited outdoors, at Malmö Art Museum in the summer of 2020, as an extension

of the exhibition Shape Shifters. Malmö Art Museum also gave us the assignment to create a live performance concert, it became;
Live Performance Concert; Body of Water, which we performed outdoors at Malmö Art Museum on the 16th of August, 2020.

Water Dialogues are also exhibited at Gibca Extended 2/10-7/11 2021, at Tjörns Municipality together with the award-winning film Precious Balance Walk, by I Still Live in Water.  And again; at the #malmogallerihelg2022 #konstframjandetiskane; a new extended version of Body of Water, in St Pauli Church, Malmö, a wonderful experience with the enormous space in the church!

Water Dialogues is an intuitive and spontaneous sound piece that ranges from exploration of more than the human world, the mystic and mind-blowing in that water is alive, and the everyday nordic welfare life where the clean running tap water is something that we take for granted with the sense that we have endless water resources.

-Tomelilla Art hall found that the sound piece was very appreciated and that it gave a deepening understanding, not only in the understanding of our relationship to water but also, and maybe the most important, our relation to ourselves, our origin, and our future.”

During the work with the coming piece Breathing Water, there was a need of building an independent web page that still is connected with
I Still Live in Water, and we also choose to become a band, and with the same name as the sound piece, to prepare for the future when we will perform the piece live. 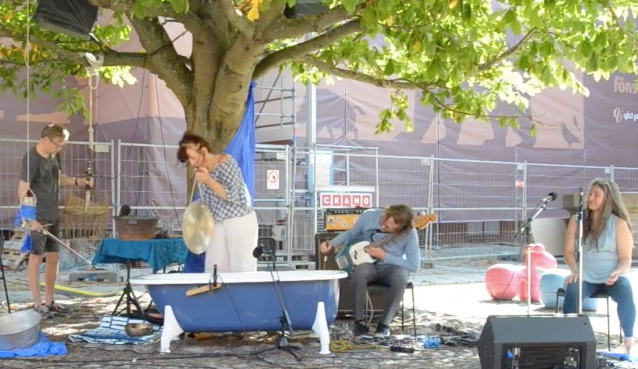 Water is instinct from Water Dialogues

has been played in Kalejdoskop and

by I Still Live in Water. And very recently

Johanna Olofsson played it in her